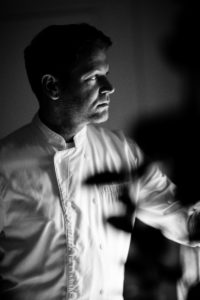 Jan Hendrik van der Westhuizen’s journey to becoming the first South African chef to obtain a Michelin star has captured the imaginations of foodies around the world.

To be taken up in the Michelin firmament is arguably the culinary world’s highest honour. But to venture to France and to receive this accolade in Michelin territory, is a rare feat.

Growing up in the heart of South Africa’s Mpumalanga province, Jan Hendrik developed a unique relationship with food. He spent his childhood evading a certain destiny as a tractor- wielding farmer’s son, instead taking to a life in the kitchen, where – nurtured by his mother and grandmothers – he refined a talent that would one day lead him to open a celebrated restaurant on the French Riviera.

In 2016, less than three years after opening its doors, JAN received its first Michelin star. Recently, Jan Hendrik expanded JAN’s borders by introducing MARIA, a bespoke dining concept named after his grandmother, who had a profound impact on his cooking.

Jan Hendrik’s award-winning début cookbook, The French Affair, featured recipes from his childhood and was very well received by readers and critics alike. His second besteseller, JAN – A Breath of French Air, picked up where The French Affair ended by capturing the mood and inspiration of the dishes served at Restaurant JAN.

In October 2017, Jan Hendrik launched his first TV show also entitled, JAN, which recently aired its second season. This breathtaking culinary travelogue captures Jan Hendrik’s journey to Michelin stardom and follows him around Nice and Apricale – one in France, the other in Italy – two places from which he draws enormous inspiration in his work. The hit show premiered to a South African audience and is now available internationally.

JAN the Journal – Jan Hendrik’s bi-annual luxury food and lifestyle publication – launched in May 2018, and is already paving the way for an exciting new culinary voyage of discovery.

And with the imminent launch of KLEIN JAN at Tswalu Kalahari – one of South Africa’s leading private game reserves – and JAN Innovation Studio in Cape Town, JAN has has taken its first steps on home turf.